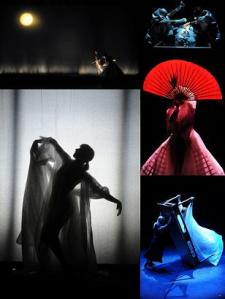 Eonnagata tells the story of the Chevalier d’Éon, Charles de Beaumont – diplomat, writer, swordsman and a member of the King’s Secret, a network of spies under the control of Louis XV. De Beaumont was perhaps the first spy to use transvestitism in the furtherance of his duties and until the day he died his true gender was a source of constant speculation, even provoking public bets in the late 18th century.

Sorry this is gonna be harsh one.. but I’ll start with what I liked about the show! I liked the aesthetics: the lighting, the set and the costumes. Fantastically creative lighting by Michael Hull (a huge reason why I like Maliphant’s works – always has good lighting), beautiful sets (as expected from Lepage), and some stunning costumes by Alexander McQueen. And… that’s about it.

It was disappointing. Conceived and performed by three of the biggest names in dance and theatre: Russell Maliphant, Sylvie Guillem and Robert Lepage. What a rare chance for them to come together to produce a work, which is now being sold as ‘a return for a limited run due to phenomenal public demand’. This show is what you call reverse synergy.. where the whole is less than the sum of the individual parts. 😦

It was much too literal and quite self-indulging. Some of the scenes were painfully obvious. Almost like Kill Bill meets Pirates of the Caribbean. Yes, there were moments of real beauty, but they came from the set, the costumes and the lighting, and not from the dancing or the movement. Don’t take me wrong – Maliphant and Guillem are stunning dancers, but the choreography and ideas just didn’t carry it through.

One minute into the opening scene, my friend and I looked at each other thinking ‘….?!?!’ It featured a guy dancing with a sword and it bothered me to watch it because one, it was so literal (showing Chevalier d’Eton at war) and two, it was so apparent that he had no sword skills. Why would you want to feature something like that in a show that you know will be the talk of the town, when there are so many people out there that have true sword skills, and this audience will probably be the first to point that out?

Sorry. Drove me a little nuts. Nevertheless, it actually was a piece that I’m glad I went to see. I am jaded by feedback and reviews, so it was one of those that it was good to have seen, just because it is something the industry is talking about and that will pop up in conversations. Also, it’s gotten such mixed reviews, it was good to get my own opinion on it. And always great to see where artists are going with their works.

The other good thing is that at least now I’ve learnt to say the title 😀 It’s taken me months!! I finally figured it out tonight. It’s おんながた as it takes inspiration from the ancient Kabuki technique of Onnagata, in which male actors portray female roles in an extremely stylized fashion.