What a treat 😀 A feast for all your senses. And the best part was getting free tickets 😀 (just kidding!)

I was curious to see how this would compare to Fuerza Bruta, a circus I saw at the Fringe Festival two years ago. The concept is similar: an in-the-round stage, where they perform around and above the audience, who are on their feet milling around below. I wouldn’t say that their circus skills were state of the art. But actually, I think that’s why I liked it. I liked the rawness of their skills and the show.

It wasn’t polished like Cirque du Soleil (who I love). It was more intimate and snappier than Fuerza Bruta. It felt somewhat like everything happened on the spur of the moment, where they truly act and react as they go. But yet everything happened quickly and efficiently. You get to see them do all the rigging, the belaying and the climbing up and down. They’d try things once.. if it didn’t work, they’d try again. If again it didn’t work, they’d just be like ehh and move on. 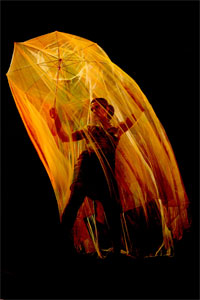 It was quite a havoc in fact.. they were all over the place, almost as if they wanted to cover all circus grounds in 120 minutes, with nothing to tie everything together. But! At the interval, we took a peek in the programme and apparently the theme was ‘Your fear or mine’. Ahh… yes, all of a sudden, you realize it was about fears. There was the weeping/sorrow trapeze artist (which I really liked), the drowning act (makes me want to choreograph something in the rain), the beautiful fire scene, the tightrope walker who seemed like she was afraid of falling…

My favourite scene was when a guy climbed up and down a single rope that dangled from the middle of the hall. Absolutely alluring… he moved so sensuously. It must feel incredible to be performing in a space like that. A single spotlight on you in a dark room.. everyone below looking up, while you perform a highly skilled art to hauntingly beautiful music.

I liked their costumes. But the best part of this show was definitely the live music.

Roundhouse is a very interesting performance space. They experiment and really try and push the in-the-round experience. And when it works, it really adds to it.

My idea of ‘circus’ has changed so much. When I was young, circus was the Moscow State Circus – the lion, the elephant, the monkey and the ringmaster. Then it was Cirque du Soleil… where they package up the best of each skill into a beautiful seamless show, and play on the ‘wow’ factor. But since living in London, circus is so much more… it’s where the odd meets the weird, the dream meets the fantasy. It’s where you can watch someone swing back and forth forever, or entangle themselves in a bunch of ropes absolutely mesmerized for actually, absolutely no reason. It’s so much more.. European.

Anyway time to shower. Standing under them chalking up their hands was like standing under a shower of chalk!