I absolutely LOVED this show. One of my all time favourites. 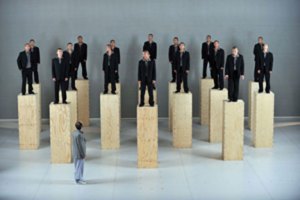 At first, I struggled with what I read as West vs. East. It started off with the celebrated Moroccan/Flemish choreographer Sidi Larbi Cherkaoui and a little Shaolin monk playing with a miniature set of rectangular blocks downstage right, where you quickly learn that they were imitating what was going on on the rest of the stage. They would nonchalantly move the blocks around, whilst 16 grown-up monks would be doing the full-size version. Sidi continued this role for quite a bit, which made me read him as having an almost god-like role. I’m quite sensitive about this whole east-as-exotic thing. However, as the show went on, it was clear that this wasn’t gratuitous; it was more of a pure look into the Shaolin world, more of a mutual observation. And it was done very tastefully and artfully.

This show had really impressive staging, and the use of the 21 rectangle blocks was ingenious and very carefully calculated. The monks would shift the blocks about, creating different shapes and varying moods. They would line them up in straight lines, disappear in and out of them, fan them out into a flower shape, bunch them up into a big block, use them as coffins, boats, mini islands… the stage set was designed by Antony Gormley and with the lighting, there were many very hauntingly beautiful moments. I loved the mathematicality of it.

I particularly liked a section where Sidi and one of the monks were doing a sequence of movements together. Whilst Sidi had a very western and contemporary interpretation, the monk had a very shaolin take on it – internal softness mixed with external hardness. Although Sidi’s interpretation slightly lacked the emotions and inner-ness, the contrast was still interesting to watch. Apparently Sidi spent quite a few years in a Shaolin Temple in China, where he learnt about and was inspired by their daily practice of the art. He then collaborated with them to create this show. 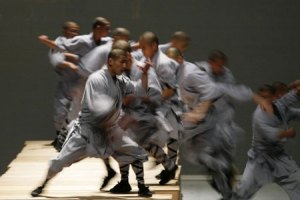 I also really liked a section where Sidi and the little monk interacted together, moving within one of the vertically propped rectangular blocks, having a father-and-son-like moment. The little boy would clamber from on top of the box to inside the box and then squirm and move about, just like little kids do in bed or when they are sitting in their parent’s lap. Also this bit where the monks were standing on top of a lined up row of blocks, doing a sequence of movements in a cannon fashion. Also…eh, there were too many moments!

A few questions I had were… are the moves the Shaolin monks do true to Shaolin? Or have they been tweaked to be more performance-based? How much input did Sidi have? Did he decide on just the sequence of the movements, or did he ask them to tweak certain moves to make them more ‘impressive’ or closer to what he wanted? How would this show be received by the Shaolin community? Was there a plot to the show? A friend I watched it with had interpreted a story out of the show, whereas I completely missed it and watched it as a series of vignettes.

I would love to see it again.