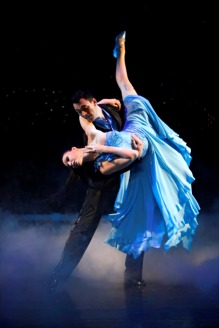 Probably the highest energy show I have ever seen. Absolutely incredible how they managed to sustain their energy levels for more than two hours of intense non-stop ballroom dancing.

This show had an interesting vibe and flavour. It started off with 90s rock n’ roll meets goth meets ballroom dancing. The dancers came out in what I would describe as ‘Camden’ wear and did a very rock ‘n roll type of ballroom dancing, be it rock-salsa, rock-cha-cha-cha or rock-rumba. Then, as the evening progressed, they switched between different flavours, changing costumes and performing different dance styles including lyrical contemporary. However, even though they very convincingly adopted different styles (i.e. flowing long dress, soft lights with a beautiful lyrical jazz piece then bright lights, short skirts with an 80s swing piece), somehow I couldn’t shake off the first impression they gave us. Goes to show how important first impressions are! That, or perhaps they should have changed their hairstyles a bit more.

Anyhow, what a fun, fun evening. I loved how the band started off concealed behind a transparent screen at the back and was eventually revealed to become part of the main stage. Live music made it that much more exciting and vibrant, and is very conducive to ballroom dancing. A slight change in beat allowed the dancers to change styles very naturally and swiftly. And so well done, it almost looked like the dancers were just improvising and not performing fixed choreography. Another great thing about live music is being able to watch the musicians. And being able to catch the drummer doing a very impressive throw of his drumsticks but only to miss catching them on the way down 😛

Despite the initial slight shock in style, Burn the Floor featured some really nice costumes – loved the dresses that revealed a different inner lining colour when twirled. 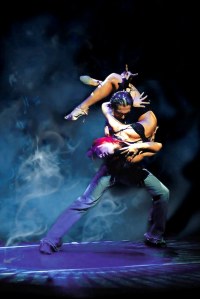 Two things I think that would’ve made a big difference I imagine are one, the size of the stage. Athough the dancers did really well and didn’t let the small stage constrain their movement, they could have easily used and filled a much bigger stage. You could imagine them dancing on London’s Peacock Theatre sized stage.

Two, disappointingly, the auditorium wasn’t very filled. Maybe about 2/3rds filled, with our section being half filled? No one sat in front, to the left and behind me. These types of shows rely heavily on the energy of the audience. The dancers did an incredible job though. It didn’t seem to have affected them – they still gave it their all.

Shows like this and like Dancing with the Stars have really helped bring ballroom dancing to the masses, popularizing what used to be quite an elite art.  And to tour the world with your dance partner along with other dance couples from all over the world… I can only imagine what an incredible experience that must be. Lucky them, and lucky us for being able to witness such great talent.