The evening was interesting… yup, interesting. The first half of the programme was quite typical. A Balanchine piece that is the epitome of classical ballet. Then a piece inspired by Spanish/Catalan life, and a ballroom-ballet fusion piece to Gershwin music performed by three men in suits pursuing a woman. And even though the evening became progressively modern, nothing could’ve prepared us for what happened after the interval.

And actually they tried. The AD of the company came onto the stage to introduce the second act (very non-European!)… which was like uh-oh, this is going to be interesting (possibly in a bad way)… because he’s just come to set expectations which they clearly found necessary due to past audience response/feedback. So he introduced the piece as a seminal German work inspired by the Bauhaus movement. The choreographer/designer was intrigued by puppets, and how audiences are more likely to put themselves in the shoes of the puppets and less likely to be distracted by the dancer’s body (true).

He explained the title Triadic Movement as conveying the choreographer’s preference for 3’s – 3 colours, 3 dancers and 3 elements to each costume. The programme book also explained the overarching idea of the costume to actively dictate/restrict movement, something that is rare even today (usually a choreographer’s biggest gripe about dance costumes!).

So anyway, as the lights dimmed, as everyone braced themselves (you could actually feel a bit of mystery and tension in the air), a toy box full of defunct post-modern life size designer toys was emptied onto the stage. Puppet after puppet came out (a total of 18, in 12 dance pieces). Each had its own personality and range of movement, each dictated by its outlook and structure.

The costumes were incredible works of art. Some so oddly designed, your imagination would take you to toys and household tools, like the bottom of a vacuum cleaner or a walking salt and pepper shaker. 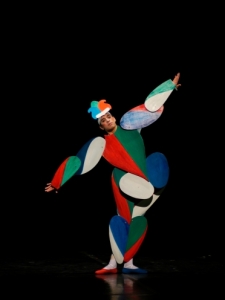 I loved the guy with the blue and red ball arms, the wooden toy guy (reminded me of Ennio Marchetto) and the two ‘knights’. They were so eerie, it was amazing! Like a beautifully choreographed nightmare coming to life on stage. And a nightmare also because it felt like the pieces eventually went on and on and on and on… to the point where some audiences didn’t even fall asleep, they went to sleep haha 😀

I can’t even conclude how I felt in general, but I am glad I got to experience it. I think.