My two favourite types of art exhibitions are photography and animation. And how great it was to catch both at the Moderna Museet in Stockholm! 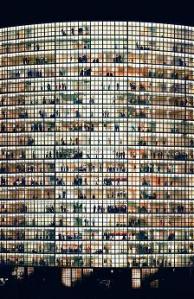 Andreas Gursky – a great German photographer. In fact, the highest priced photographer alive (as of 2007, he holds the record for highest price paid at an auction for a single photographic image: 99 Cent II, Diptych, sold for £1.7 million at Sotheby’s)! Hadn’t even heard of him before this exhibit. 😛

Not sure how he captures stillness in really dark environments i.e. a concert crowd mid-motion completely unblurred. The images aren’t grainy.. hmm.. so don’t think he used a high ISO. What an incredible camera he must be using. He also must do a lot of post digital work in order to bring out colours and collage together images, as some of the landscape pictures are so extremely detailed, that almost too much of the photo is in focus. My favourite is this huge photo of skiiers racing down the mountain… absolutely beautiful. Also ones where he looks into buildings and shows what every person on every floor is doing, including the HSBC building in HK (must be collaged?) The only thing is, with all his works – decades of photos – lined up next to each other, you see that his style hasn’t really changed over the years… You can tell that he relies more and more on digital editing. Neither necessarily a bad thing (from an audience point of view)!

Photographers must see so much beauty in the world. They take on such different perspectives and they really stop and look at everything around them. I should really learn from them! Stop and smell the flowers.

The other exhibition that was memorable: Tabaimo, a Japanese animator and illustrator. She had three animations on display…public conVENience, Midnight Sea and dollfulehouse. All very odd. All 3 of these animations internalized the external. Gave something inanimate a very humane side to it. Like dollfulehouse (a doll’s house) was given a heartbeat (actually to be specific, an octopus’ heartbeat – told you it was weird…) Mesmerizing and facinating. Her style is very ‘Japanese’, in the sense that her drawings are styled like the ‘typical’ Japanese seawave you see on old-school posters. Her animations are drawn beautifully and with great detail; her work is hauntingly beautiful, disturbingly peaceful, where fable meets reality. When you watch, you anticipate that something dark is going to happen, something grotesque.

She says she never knows where she is going when she starts, which is an interesting way of working. I wonder what the balance is between, knowing exactly what you want to create, and working to creating without an end result in mind. Which road do artists tend to go down in order to achieve their ‘best’ work? Of course it is always somewhere in between… hmm but which way do you lean towards more? I think I’m more the former, but maybe I need to try the latter.

As for lots of the other exhibits/pieces around the museum: some really good, some cool, some odd, some Picasso, some Degas, some Miro, some Dali.. and… some that can be wrapped up with, using my Dad’s words: ‘It’s art… because I was the first to come up with it’. i.e. a video of this guy who strips a bed and sticks everything (pillows, duvet, sheets) up his shirt and then climbs into bed… um…

I’m quite liking this blogging thing. It makes me do a bit of research, a bit of homework and follow up on my thoughts. 😀

One thought on “Moderna Museet”