Really enjoyed this show. Haven’t seen much cabaret before (this wasn’t too full on cabaret though) and hadn’t heard of Camille O’Sullivan till very recently. She’s so eccentric.. but totally in character for what she does.

Her version of David Bowie’s Rock n’ Roll Suicide was awesome. I also liked her version of Greensleeves. I liked how she would start off some songs quite mellow and then they would become rock-like. 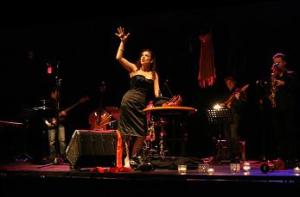 Her background is fascinating… half French, half Irish and is a qualified architect. I always find backgrounds fascinating and so read up on them (usually afterwards because I don’t like to make pre-judgments)… and I have to shamefully say that I am still constantly awed/surprised by artists’ backgrounds because it is so easy to think that all are classically trained, or that all are solely artists, and nothing else. There is somewhat a stigma regarding artists too – being one, or becoming one…having a ‘proper’ stable job versus the unstable life/career of that an artist.

She graduated in 1996 with first class honours and the highest marks at the university in a decade. She then worked as an architect during the day, winning an Architectural Association of Ireland award in the process, while continuing to perform in clubs at night. In 1999, she was involved in a near-fatal car crash where she suffered a head fracture, her pelvis was fractured in six places, her hips displaced and the tendons in her hand were shredded. It was months before she could walk again, and she was hospitalized for a year; she still has a metal plate in her hand and steel pins in her legs.

The accident encouraged her to follow her dream of singing and she performed her first show after the accident while still in crutches.

Takes a lot to make you realize some things sometimes and to remind you to seize the moment. What makes you follow your dreams?