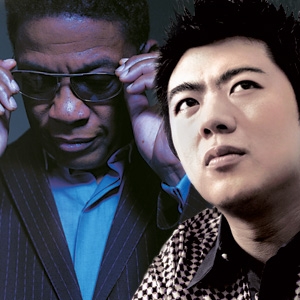 Lang Lang and Herbie Hancock’s Rhapsody in Blue (Gershwin) was fantastic. The way it was arranged really brought out the best of their talents – Lang Lang, classical and Herbie, Jazz.

For the earlier part of the evening, they played predominantly classical pieces and a piece where they played together – four hands on the piano. Herbie isn’t a classical pianist and it felt slightly frustrating because you can’t help but compare their skills. They were still amazing, but it was really the second half that made the concert special. Two giants of their own fields, bringing together their two worlds. It must be so much fun to jam and improvise on impulse.

As I mentioned before, I always find it frustrating to watch when people’s skills aren’t used to their benefit and to the maximum. Particularly in dance, when the choroegrapher creates a dance, but doesn’t take into account the dancer and what he/she can do best. I know that may compromise their artistic vision etc, but for me, it compromises the outcome. I think I felt the same way in this case.. that they should have done more classical meets jazz pieces, and that Herbie should have concentrated more on jazz (though it was great to see what he can do classically – as this is quite rare). Also, Royal Albert Hall isn’t really a good venue for concerts. The acoustics aren’t very good, and the orchestra isn’t big enough to fill the whole hall musically. However, being one of like 8000 to see this show felt very special 🙂

Read an interesting article about the conductor John Axelrod a while ago. He has a fascinating background… trained as a conductor (including sessions by Leonard Bernstein, who is most famously known for writing West Side Story‘s score), then decided to drop it all. Discovered Smashing Pumpkins, then many years later, decided to go back to a classical music life.

So much talent, so many stories. 🙂