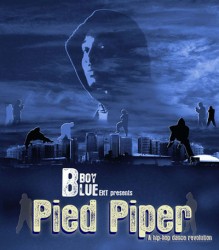 I think it’s great that there are two cultural venues in London this Christmas that are featuring hip-hop/street dance shows as their main festive offerings. Even more, it’s evident that there is big enough of a market to support both. The audiences were packed when I went to see the two shows.

Pied Piper was enjoyable. The dancing was very sleek and they were very well rehearsed – completely synchronized. Kenrick H2O Sandy is awesome. I really liked how they incorporated a local youth cast, who played the children that Pied Piper led away at the very end. I also liked how each gang had a distinctive dance style. Plus the music was made especially for the show, so was very contemporary and fitting.

For hip-hop dancing to hold the attention of an audience for more than 15-20 minutes, the show needs a narrative to carry it through. Unfortunately, the narrative wasn’t very sophisticated (the story kinda doesn’t go anywhere), and there were quite a few gaps in it. Like, why doesn’t his three sidekicks help him out when he fights the ASBOs? Also am really not so sure about the morals and messages behind the show: fighting is good, it’s how you solve problems. ASBOs are prevalent in London. Taking ‘good’ kids and training them into mini Pied Pipers (vs. leading them into the river as in the traditional tale) as revenge to the politicians who refuse to pay up after Pied Piper helps them to get rid of the ASBOs. I think this will be a huge barrier for them for continuing to develop this show further into say, a West End production like Into the Hoods. They will also have to refine their video graphics quite a bit!

Despite all this though, it was an enjoyable show and Boy Blue have really come quite a long way in their skills. Sadly and unfortunately though, the marketing doesn’t do this show justice. 😦

It’s hard not to compare this to Into the Hoods (as I can’t help but compare things and most reviews have been doing this too!)… I have to say, Into the Hoods is a much better show, though this performance probably featured more sophisticated hip-hop dancing.