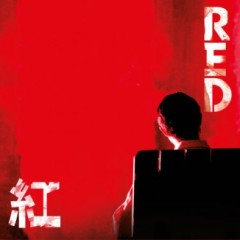 After watching Hong Kong Repertory Theatre’s version of Red last year, I walked out really wanting to get a copy of the script. Their version was done very well but entirely in Chinese. While there were English surtitles which helped with some of the references (Dionysus, Apollo), there was so much food for thought that I wanted to develop post-show (trying to digest philosophy in Chinese is hard!). But as Hong Kong life goes… I very quickly forgot about acquiring the script, but still thought of the play fondly from time to time.

Recently, I watched Red again in Singapore by Blank Space Theatre. Although I was at first slightly apprehensive watching it in Singapore as was unsure about the actors and – sorry – accents (really wish I saw Eddie Redmayne and Alfred MoIina in the original version!), I was glad to watch it in English (and no accents!). And while inevitably I couldn’t help but compare the two productions, it reminded me why I loved the play so much.

John Logan did a brilliant job writing it (he also wrote the screeplays for Gladiator, The Aviator, Sweeney Todd and Skyfall). He threaded differing opinions about the value of art and the artist very well – differences due to personal values and perspectives, due to the changing times and trends, and due to the changing nature of the traditional master and apprentice relationship. The text did a brilliant job in developing the characters, both by revealing their past in bits and pieces, and by challenging their thoughts through debates. Plays about artists are really hard to do well – in part because the actor is ultimately imitating the successful artist and in part because the philosophies and ideas can easily come across as patronizing/snobbyish/pretentious. I can’t quite explain why it worked in Red though, but it did. Perhaps it’s because the play was about Rothko, and for him, there is no differentiation between life and art. You see how much he struggles with the monetary values placed on art and the hypocrisy of creating commissioned art. But of course this is all subjective (which is the beauty of art), as this play definitely divided the critics in London and New York. 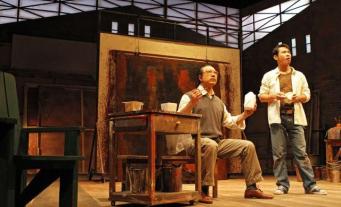 Lots of inspiring things about the play! I thought HK Rep did a much better job in all aspects – lighting, set design, acting, atmospheric creation and costume. I particularly loved the scene where Rothko and his assistant frenziedly primed the canvas with sloshes of blood-red paint. Ethnicity of the actor regardless of the character’s ethnicity never bothers me. In fact, it adds points – like when I saw a Chinese Billy Eliiot – I love the blind-casting idea. Though obviously this isn’t blind-casting, since it’s an adaptation. Anyway, yes, the HK version – everything was a lot more real and not so staged. The Singapore’s fake nose and fake hair was taking it a step too far! And I never compliment Hong Kong City Hall, but as a space it’s better than Esplanade’s Studio Theatre.

So yes, while I still don’t have a copy of the play, at least now I have been reminded to get one. Off to hunt for it now…!