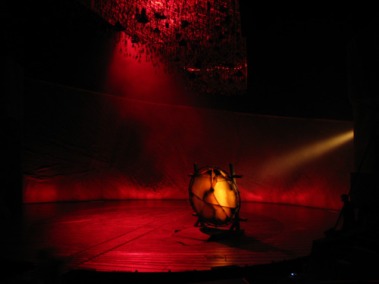 Visceral. An incredible spectacle. I suppose you wouldn’t expect any less from Danny Boyle (director of the London 2012 Olympics Opening Ceremony, Slumdog Millionaire, 127 Hours and Trainspotting).

Although familiar with the characters of Frankenstein and the Creature, I’ve actually never read the play before and so was delightfully shocked at the more disturbing moments. Mary Shelley was only 18(!) when she penned the book, which is incredible considering how she managed to conjure up this story that covers some of the most timeless and significant themes of our century: genetics, the morality of science, vanity, parental responsibilities…and it was the first science fiction book where creation is not attributed to divine forces.

I didn’t realise that the Creature learns to speak (which he does in the book but not in the movies). This is fundamental to the story, as it’s through his voice we learn the hypocrisy of mankind, and the morals, ethics and expectations of kindness that we uphold for others. This play showed this alternative perspective powerfully as we follow the Creature (instead of Frankenstein in the book), who gains the sympathy and empathy of the audience when it goes through the sad but inevitable transformation into its nemesis and alter ego – Frankenstein.

So many visually stunning details – hundreds of light bulbs dangling to create a canopy of lights that illuminated and flashed to Frankenstein’s electrical experiments, the incredible stage design featuring a steampunk carriage with electrical sparks, a set that would rotate and completely descend beyond view (high undercroft!), the green grass that you can hear crunch under the Creature’s feet, the stitches of the Creature and the final silhouetted image of the Creature and Frankenstein continuing their painful journey inevitably bounded together… woweee.

Compared to Coriolanus on screen, watching Frankenstein on screen actually was a plus. Although you lose the live atmosphere, the camera allowed for you to see shots you would not otherwise see – the thrilling aerial views and the intense close-ups – as Olivier Theatre is quite big. 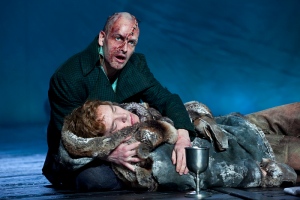 When buying tickets, I couldn’t decide which version I wanted to watch (the actors swap between the roles of the Creature and of Frankenstein on a nightly basis). The actors shared Best Actor awards at the Olivier’s and London Evening Standard Awards… with Benedict Cumberbatch also scooping Best Actor at the Critics’ Circle. I was more inclined to see Benedict Cumberbatch as the Creature, as I could envision him creating just the most weird and mesmerizing creature. And reviews tended to lean towards Cumberbatch as the Creature. I actually really couldn’t decide in the end and so ended seeing both versions. And I’m so glad I did. I actually preferred Jonny Lee Miller as the Creature. I felt like his character was more humble and his painful journey into becoming a man was more real, more believable (he was inspired by his two-year old kid). The way he moved was also less jarring to the eye. Benedict Cumberbatch has a natural air of arrogance and so he was very fitting for the obsessive scientist, the scientist whose mind was too advanced for this world. The man who could not bring himself to destroying the creation is most proud of, ultimately bringing down his loved ones on the way. But yes, what stunning performances from the two lead performers! 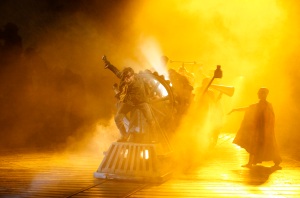 There were some disappointments though – some weak text, very unconvincing acting and poor character development of some of the supporting characters (Frankenstein’s bride and father!)… a shame, but it didn’t matter (much) to me. :D

The soundtrack created by Underworld was very fitting. I particularly loved ‘Dawn of Eden’, the track that accompanied the Creature’s first foray into the beautiful natural world – showing child-like innocence and the magic of discovering things for the first time. Sadly a spirit that we lose as we grow older.

Creature:
Slowly I learnt the ways of humans:
how to ruin,
how to hate,
how to debase,
how to humiliate.
And at the feet of my master I learnt the highest of human skills,
the skill no other creature owns:
I finally learnt how to lie.