Good theatre may not change the world – in large or personally – but it speaks to our hearts, and prompts us to understand what it means to be human. It acts as a mirror on society, and brings distant worlds much closer. 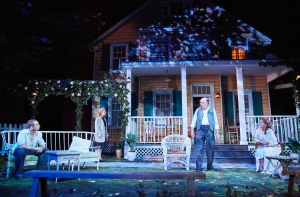 And Arthur Miller is incredible at creating just that. Although the premise of All My Sons is so far removed from my personal life (inspired by a 1940s post-war US incident), the play had characters and themes that resonated: our capacity to create untruths, to sacrifice values in greed and in pursuit of ulterior motives, to hold our parents to high moral grounds and be unable to accept that they can do wrong, to turn a blind eye out of desperation… (but also more positively, to unconditionally love and forgive those around us). Miller has this magical ability of creating magnificently multidimensional characters. In the span of two short hours, they develop, they become even more real, and somehow climb their way into our hearts.

I loved the neighbourhood theme, where neighbours were significantly part of each others lives. It reminds me fondly of my childhood… back in the day when we actually knew all our neighbours who had kids. When front doors were never locked and we streamed in and out of each other’s places every day after school, to play, to snack, to eat, and begged to sleepover at each other’s because our homes next door seemed too far. When we would get in trouble for climbing under our building (war tunnels beneath!) and walk along high walls. When my mom had to call around at every house in search of my sister and I. Now, sadly, I don’t even know a single neighbour of mine 😦

The set was simple, yet aptly and beautifully realistic. When the play starts, you really believe that the family is living the Great American Dream. There were no set changes which provided a stark contrast for the tragedy that was unfolding. The play happens all within a day, and the set was effectively lit so that it went from day to night to dawn realistically in parallel to the wretched realisation of truth. And the acting was good – a bit flat at first, but it built up – to the point you actually forgot that they were acting. Miller wanted ‘actors who were truthful and interesting but, also, capable of expressing deep emotion’. That, he got!

One thought on “Rose Theatre Kingston: All My Sons”