Pleasantly surprised! Really enjoyed watching this production. Have to admit, I had my reservations about yet another Westernized interpretation of Dream of a Red Chamber – especially after the disaster that was the Hong Kong Ballet production back in 2013. It is not an easy job to have to pare down a 120-chapter book with 100+ characters, to 2 acts, 3 hours, 10 singing voices, a narrator and a chorus. And to concurrently have to do it in another language… the show was well done. 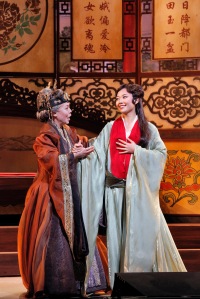 Yijie Shi (Bao Yu) and Pureum Jo (Dai Yu) had impressive voices. I actually had the honour of meeting Yijie Shi at a friend’s father’s 70th birthday last year when a group of Shanghai opera singers performed for the occasion. So it was great seeing him, such a young accomplished and humble talent, on stage with the San Francisco Opera and performing alongside the Hong Kong Philharmonic. I also thought Zhang Qiulin who played the grandmother was incredible. They all had really powerful voices that delivered an incredible range of emotions and musical notes. And they had the ability to be melodramatic and uncontrolled… with the utmost precision and control. 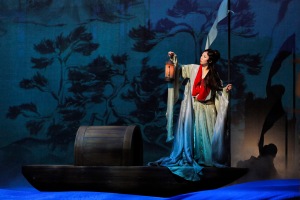 The set, for the most part, was very well designed. Extravagant: Chinese painting mountains, floating gates and pillars, and bamboo forests, which was fitting of the extravagance of the family depicted. It was complemented by flowing silk costumes… though not always terribly flattering on the cast. The biggest issue though, was the use of projections. I appreciated the 21st century touch. And how the projections (such as the brush calligraphy of the lovers’ poem) were the only visual depictions that not only highlighted the importance of literature during that era, but also echoed how Dream of the Red Chamber is one of the greatest Chinese novels. But the projections weren’t done well enough to cleverly bridge the era gap and some of the substandard graphics actually took away from the otherwise beautiful set. I also have this pet peeve of silk cloth being waved about to represent the sea. But I did enjoy watching the scenery components get moved on and off by the chorus/extras, which doubled nicely as all the help rich families would’ve been served by back then. And the fun one has watching all various set pieces that flew in and out of the wings almost excused all the noisy set changes hehe. 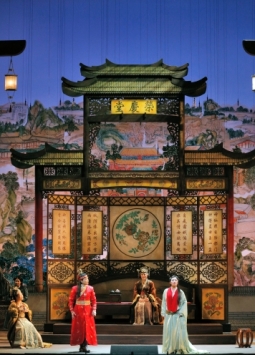 On the night that we watched the production, which was the first night of it playing in Hong Kong, there were actually a lot of production glitches. Set bits not being released at the right moment or pieces accidentally falling/collapsing. Projection timing off by those ever so unforgiving milliseconds. And what surely drove everyone crazy – the subtitles! Terribly timed, constant malfunctions… argh! Exacerbated not only by the fact that opera is difficult to follow (worse if your English isn’t strong enough), but that this is one of the most classic Chinese texts… a lot of people will undoubtedly be comparing the Chinese text with the English interpretations throughout the play.